Have you ever tasted the ‘nyögvenyelő’ (‘hard to swallow’)? And the poppy-seed maize? These weirdly sounding names stand for dishes. Did you know that, in the Nyírség, the Hungarian dish ‘tócsni’ is called ‘lapcsánka’? And that stuffed cabbage is made with tomato here? Have you heard that the Hungarian writer Gyula Krúdy, who was born in Nyíregyháza, had an excellent talent to write about dishes, beverages, and gastronomy in general? Although he left the city at a young age to live and work elsewhere, in his heart he never left Nyíregyháza.

Fine beverages are also due with fine dishes: from the 8 pálinkas that have a protected designation of origin in Hungary, three are from Szabolcs-Szatmár-Bereg county. A sip of pálinka is nature itself, and can bring you even closer to the atmosphere of the Nyírség region.

If you are curious of the region’s gastronomy, come to the large gastronomy events of Nyíregyháza and, in addition to tasting the delicious dishes and beverages, experience the warm hospitality of the people! 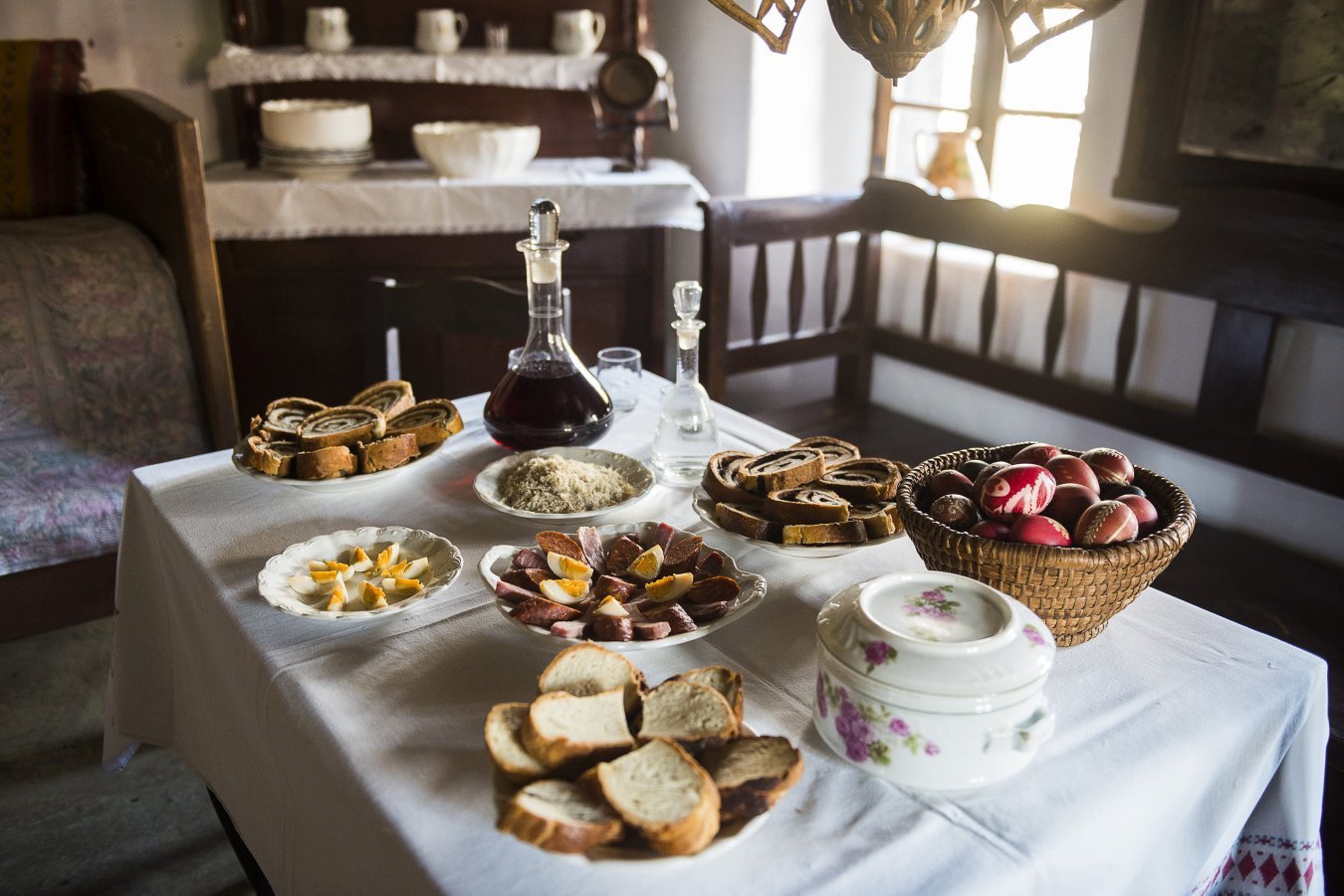 Dumpling soup from the Nyírség

Ingredients for the soup

Preparation of the soup

Ingredients for the potato dumplings

Preparation of the potato dumplings

Stuffed cabbage as they make it in Szabolcs county

Put the minced meat in a bowl, wash the rice, and add it to the meat.
Brown the onions on oil, take it off the heat, and then sprinkle with the read pepper (this is a basis for a stew), then pour this onto the meat and the rice. Add one can of tomato, the salt, pepper, and the smashed garlic. Mix it thoroughly with your hands.
Cut out the centre of the cabbages, and place them into hot but not boiling water, head down.
The hot water will make the leaves come off of the cabbage, they will get soft, and then you can take them out. Cut the stalk off the leaves, cut them into two (lengthwise in the middle), then fill with the stuffing so that you get small cornet-shaped forms. Don’t roll them too tightly, so that the rice have space to swell. Prepare the smallest cabbages as possible.
Cut the remaining cabbage leaves into slices or long strips, put them onto the bottom of the pot, sprinkle with a handful of finely chopped bacon, and put the stuffed cabbages onto this, one by one. After every two rows sprinkle with another portion of bacon and continue putting the cabbages until there is none left. Pour that much water into the pot that is enough to cover the cabbages, and then put it on to cook.
Before it’s cooked soft, put slices of tomato, paprika and Californian paprika onto it. Mix the other can of tomato with hot water in a small bowl, and then pour this onto the top. Cover with a lid and leave it to cook soft.
At serving, pull aside the pepper and tomato stew formed at the top, then serve the stuffing on a plate, with the stew aside.
Serve with sour cream if you like.

Preparation of the poppy-seed maize

My grandparents used to prepare this dish from shelled maize on the cob for Good Friday, and used an ancient cookpot for cooking. Cook the maize in boiling water in about five minutes, strain it, mix with two tablespoons of honey (the third is required at the end for sprinkling), with the vanilla sugar and some powdered sugar. Sprinkle with the poppy-seed, mix with the maize, and put on a separate plate, and sprinkle with the remaining powdered sugar. At serving, sprinkle with some lemony honey.

Pálinkas with protected designation of origin 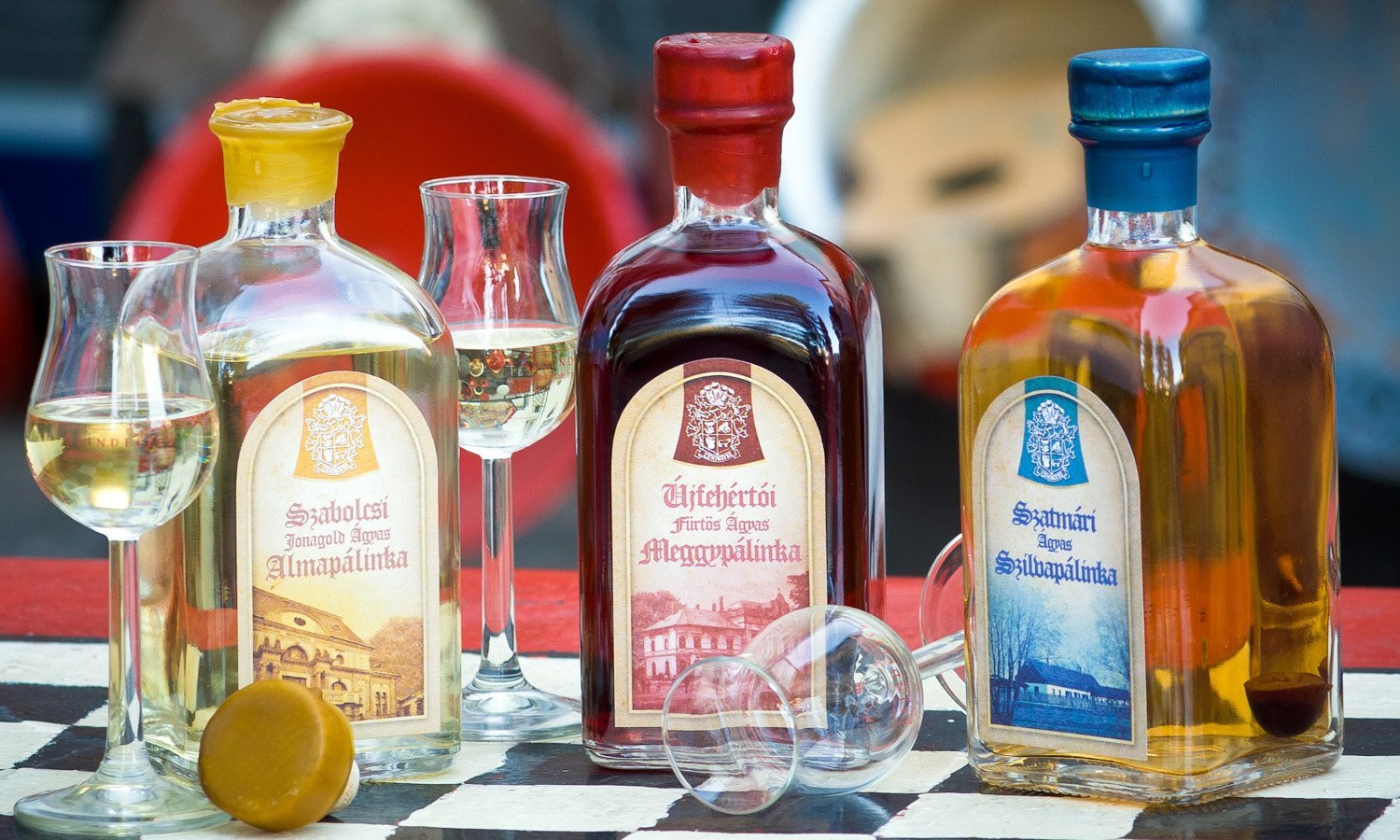 On the alluvial soils of the Upper Tisza and Szamos regions, there is a long tradition of fruit production. The people living here not only offered their produces in a raw form but also prepared finished goods from the juicy fruits according to traditional recipes, such as jams, dried fruits and ‘pálinka’. The plum pálinka of Szatmár has been a famous beverage and welcome drink of the Szatmár-Bereg region for hundreds of years. Its unique flavour is achieved by distilling and maturing this type of blue plum (growing on the alluvial soil of the Tisza and Szamos rivers, sometimes in half-wild way) as well as the fermented fruit mash traditionally in a copper cauldron.
It is made exclusively of plum, from the fruit of the fully ripe Penyige plum (or, with its other name, ‘I-don’t-know plum’) and Beszterce plum.
Sensory characteristics: the plum pálinka of Szatmár is clean like a mirror, has a light yellow colour from the maturing. This fruit spirit has a harmonic, smooth and nice plum flavour and fragrance, with a core flavour resembling bitter almonds.
Alcoholic strength: at least 40 V/V%.

The apple pálinka of Szabolcs

Apple production has been outstanding at this area since the 18th century, and so has been distillation, although it was not performed in large quantities until the 20th century. Apple pálinka, the spirit produced in the largest quantity, has become the most frequently consumed pálinka in the region. Peasants consumed it in the morning before taking up work, or when working together.
Pálinkás made of apple can become high-value spirits if distillers let them rest for a long time and if they are matured in casks. Due to maturation in casks, the fresh, ‘perky’ spirit calms down and gives a beautiful, elegant product.
It is made of the ripe apples produced in Szabolcs-Szatmár-Bereg county. The most frequent apple types: Jonathan, Jonagold, Golden, Red Delicious, and Idared.
Sensory characteristics: distillation in a traditional copper home-distilling apparatus and the multiple refinery procedures result in an apple pálinka with mild taste and fragrance, and a nice aroma. The apple pálinka of Szabolcs is a fruit spirit with nice apple taste and fragrance, it is especially clean, colourless when fresh, then becomes a little yellow during maturation.
Alcoholic strength: at least 40 V/V%.

The sour cherry pálinka of Újfehértó

The wild counterpart of the type of sour cherry, now serving as the ingredient of this pálinka, has been growing in this area since the early 17th century when the settlement, Újfehértó, was founded. This sour cherry was consumed due to its high value of nutrients, but also for indigestion, against constipation, heart conditions, and even renal insufficiency. Probably this is one of the reasons why the ‘excess’ was not put into the fruit mash until the end of the 19th century, so it did not serve as the ingredient for pálinka until that time. The basis of good pálinka is fruit of exceptional quality, with outstanding nutrient values. This requires the choosing of a production area that is most suitable for this kind of fruit, and Újfehértó is that kind of region.
Exclusively the ‘grape-bearing’ sour cherry of Újfehértó and the ‘fruitful’ sour cherry of Debrecen can be used for producing this pálinka.
Sensory characteristics: clean like a mirror, colourless, has a nice sour cherry taste and fragrance, it has the fresh zest of the fruit, and a little marzipan flavour do to its core characteristics.
Alcoholic strength: at least 40 V/V%.